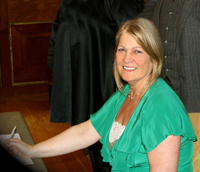 Ursula Mc Morrow was born in Straduffy, Kiltyclogher, Co. Leitrim, close to the birthplace of Sean Mac Diarmada. Sean’s mother was Mary Mc Morrow and his first cousin James Mc Morrow was Ursula’s grandfather.
She lives and works in Connemara, County Galway and her career has included health education, family support and teaching.

A proud presence in my childhood,
first cousin of my grandfather,
of the same line
and the Leitrim borderlands

where secrets were closely kept,
shadows moved in the night:
nothing was certain.

Keeping to the back roads,
you moved through the countryside,
a Gaelic League Timthire
pledging with people
who had never hoped to be free

And gathered comrades among
raveled emigrants
in England, Scotland and America;
careful not to make promises
that you couldnât keep.

You were the mind of the revolution:
powerful, thorough,
watchful

and achingly handsome,
with astonishing wide smile
and cobalt-blue eyes
that said everything.

But some scorned you as one of those
desperadoes in the Post Office.
Reading a bloody proclamation indeed,
that foolish school master;
no statesman among them,
only trouble makers
and those mannish women
who followed, scenting excitement.

Min grieved her hoped-for husband
and the priest who loved you
kept watch until execution;
stifling platitudes,
listening as you railed
against church opposition
and recited for the last time
Brian Boy Magee.

Later, unhinged,
he roamed to Dunquin,
and a Gaeltacht cottage,
dedicating himself
to the dreams of the sacrificed.

My father was cautious about claiming you:
not wanting to sully
a precious association.

A hero in the family:
now that was something
to be quiet about.